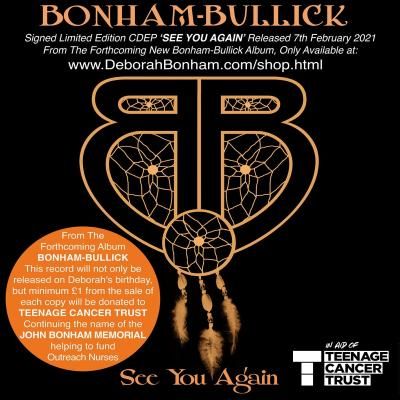 In advance of the October 2021 ‘Bonham-Bullick’ album on the USA label Quarto Valley Records, Deborah Bonham and Peter Bullick release a limited edition signed three track EP
‘See You Again’ on the 7th of February 2021.

Minimum £1 from the sale of each copy is being donated to Teenage Cancer Trust in the name of the John Bonham Memorial, which continues to raise funds for outreach nurses.

Deborah and Peter, along with their band and special guests, have recorded a new Blues, Rock and Soul-inspired album ‘Bonham-Bullick’, a joint project songbook of some great and obscure composition interpretations spanning seven decades. The album takes you on a fascinating journey with songs from the greats such as O.V. Wright, Johnnie Taylor, Albert King and Ann Peebles together with more modern day luminaries such as Bernard Fowler and Mark Lanegan. Throughout the recording process, Deborah and Peter have shown a deep respect for the original songs while reaching deep into their hearts and souls to make each song an exciting new adventure for the listener.

“Deborah Bonham - The best female vocalist and tightest band we should have been hearing for the last 20 years. An arena worthy show in a New York club!”

“Guitarist Peter Bullick constantly showed why Paul Rodgers touted him as a replacement for Kossoff should Free ever reform. His bluesy but always economic fills and solos lit up the stage.”
Tight But Loose Magazine