After my amputation, someone had to pass me my own child

Dionne was 24, pregnant with twins and had two older children when she first started noticing pain in her leg. She was eventually diagnosed with osteosarcoma and had to have her leg amputated – but, she says, she refuses to let cancer or disability define her.

When I was 24 and pregnant with my twins, my left leg was really badly swollen and painful. I couldn’t walk, I was vomiting, and I was limping. I went to see my GP in November 2016, but was told that I’d trapped a nerve.

After giving birth to my twin boys, it got worse. I was sent in for an x-ray and told that I had early signs of osteoarthritis. They put on steroid injections into my knee. I was in more and more pain, and I was pretty much on autopilot. I’d just given birth so didn’t have any choice but to carry on.

When I couldn’t take the pain anymore, I had an ultrasound and they had another look at my x-ray. I was told that I had a 2cm tumour inside my tibia bone which got missed the first time. A subsequent x-ray found that my tumour had grown to 4cm. I was diagnosed with osteosarcoma, a type of bone cancer.

Lorraine was absolutely amazing, she helped me with everything through my treatment, and helps me now with things like sorting out childcare. I honestly don’t know what I would have done without her! She’s always there at the end of the phone. 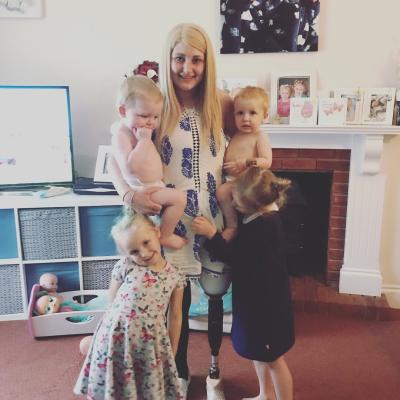 I was given the option of having my leg reconstructed, but this meant it was more likely the cancer would reoccur. It was a tough decision. Ultimately, I knew that it would be the best thing for me and my children.

Although I have come to accept it, the amputation has completely changed my life. And it’s had a huge impact on my children, too. After I had my amputation, I couldn’t pick them up myself. I would have to wait for someone to pass me my own child.

I also found it really tough to leave them when I went in for treatment, and I missed out on things like school plays. It was like I didn’t want to get too attached in case something happened to me. If I did die, they wouldn’t know that they had missed me.

Lorraine set up counselling for me and the children to make sure they were OK too.

There is an amazing support group called Mummy’s Star, for mums who have been diagnosed with cancer or had cancer in the first year of their child’s life. The mums on there have been a huge support. They get how it feels.

My girls are now eight and seven, and my twin boys are three. I couldn’t ever let cancer beat me because I had my children watching me. I want them to know that whatever you go through, it doesn’t define who you are.

Having cancer made me who I am today

Cancer conversation cards to help you talk to friends and family