The full cost of the unit has been met by Stephen Sutton’s fundraising. The new unit will provide an age-appropriate environment for young people with cancer to receive care.

A new Teenage Cancer Trust unit is now open at the Royal Hospital for Children and Young People in Edinburgh. The new unit is fully equipped to meet the needs of teenagers and young adults with cancer from Edinburgh and the surrounding areas.

Previously, teenagers and young adults were being treated at the Royal Hospital for Sick Children, Edinburgh where they received specialist care. The newly built unit is an improvement on the last space providing a friendly, age-appropriate environment for young people to receive treatment. It has four warm and inviting bedrooms, an isolation bedroom, a ‘snug’ social area, a study room, a complimentary therapy room, and an outside garden area. There is also a day case room with multiple beds.

Conor Smart, the Teenage Cancer Trust Youth Support Coordinator based on the unit, said: “It’s like night and day. This unit is such an improvement compared to where we were treating young people before. It’s light and friendly and a much nicer environment for young people to be in - they’ve been amazed at all the facilities when they’ve come on to the ward. I’m delighted we can now provide this space for young people with cancer in Edinburgh.”

Aidan Hogg, 15, who is being treated for leukaemia on the unit said: “There’s a lot more space compared to the last ward I was on and the rooms are better equipped. I have more independence here – I don’t have to ask the nurses for everything. I can just go to the snug and grab juice and crisps for myself.”

“I’m thrilled that the entire cost of this new unit has been met by Stephen’s fundraising. It’s fantastic to see that almost seven years on since Stephen passed away, his legacy, and the fundraising in his name, continues to change the lives of young people with cancer for the better.

“Stephen’s wish was for every young person with cancer to have the best possible support throughout their treatment and he would be so happy to know the money he raised is being used today, to create a better environment for teenagers and young adults with cancer.”

Fiona Mitchell, Service Director, Women’s and Children’s Services, NHS Lothian said: “The facilities within the Teenage Cancer Trust Unit are simply outstanding and will make such a big impact on the lives of teenagers and young people with cancer. We are incredibly grateful for the ongoing support of the Teenage Cancer Trust; through their generosity, and the incredible fundraising efforts of people like Stephen, teenagers and young adults have a welcoming, unique and specialist space to receive their treatment.” 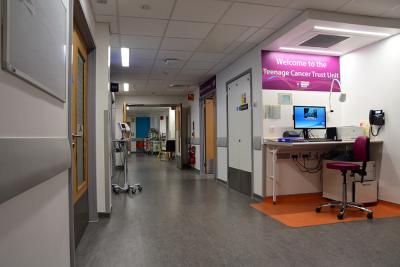 How we build our units